EGD can thank my mother-in-law for the chance to experience Huntercombe. She doesn’t visit us very often, but on one weekend not so long ago her presence meant that I was able to steal away for that most precious of experiences, a Sunday twilight game. Not being a member of a club round these parts, I was looking at paying a green fee somewhere. The obvious choice was the local pay-and-play track. Perfectly adequate and a decent price, but decidedly unfulfilling. Nagging at my mind was the fact that for nigh on 20 years I’d been meaning to tick Huntercombe off my list of must plays. Ever since driving past it in 1992 with my former colleagues at Hawtree on our way to play Billingbear Park, supplemented by repeated reminders courtesy of the iconic photograph in Fred Hawtree’s golf design bible, this historic Willie Park Junior course had been permanently on my radar, but had never quite appeared within my golfing horizons. Finally, here was an opportunity to address this omission. It was a lovely afternoon and the pro had confirmed the course would take my green fee, so within 50 minutes of heading out of the driveway, I was teeing it up on the quirky par 3 opener. 5 minutes later, after what I’m informed is the customary 3-putt, I was well on my way. It was a good choice. Huntercombe is amazing.

Rarely have I played a course that was so involving for every single shot. There was always a decision to be made; a risk to be assessed; a choice as to how to play the next shot. Topping it off was a set of some of the most interesting putting surfaces ever conceived. This is a design that has remained largely untouched since Willie Park Junior laid the course out in 1900-01 at roughly the same time as he was designing Sunningdale. More than a century later the course is still a captivating experience for the modern golfer. All this on a course laid out over modest terrain on a compact site. There is a lot that the modern golf architect can learn from the study of a course like this, most specifically what is it about the design which has given the course an appeal so enduring that it has remained largely preserved for 110 years?

With this in mind I went back to the EGD design office the following day and suggested that we try to arrange a study trip to Huntercombe. Generally, getting more than two of us in the same place at the same time is a task akin to herding cats, but on this occasion and perhaps encouraged by the prospect of a decent round of golf, five of us were able to commit to making the trip. I made the arrangements through Huntercombe’s genial and very helpful secretary, Nick Jenkins and within a couple of weeks we were out of the door early one afternoon and heading up into the Chilterns. Nick had very kindly arranged for Course Manager Neil McCarthy-Primett to accompany us on a walking tour of the course prior to our game. Neil has been at Huntercombe for years and so was able to fill us in with a wealth of information to supplement our own study of the layout. It was the first time that either Jeremy, Ross, Dave or Alex had ever seen the course and I think I can safely write on their behalf that they were all wholly impressed with what they saw.

For me it is the intricacy of the design that sets it apart. Everywhere you look there are humps, bumps, pits and hollows. Often these hazards have to be hit over at some point on the journey from tee to green. Other times they jealously guard the flanks. Never can they be ignored. Longer hitters will often have to keep the driver in the bag to sacrifice length for precision, which is probably the main reason why it is still a relevant design to this day. The integrity and length of the approach shots has been preserved by the necessity to keep the ball out of the fierce hazards from the tee. It definitely has penal undertones, consistent with the time it was conceived. That is no bad thing. Neil recounted the fact that the club had had to reroute the 6th fairway away from a parallel road and how, in so doing, he had been forced, much to his regret, to fill in one of the chasms. This is a club that knows and honours the value of its course design. Some of the greens are classic museum pieces. The 8th is the obvious showcase example. A giant four foot tier separates the green into two distinct zones, with the narrow upper tier then sloping away to the back of the green. Check your indemnity insurance cover if you ever try to do that these days! Perhaps the only downside to the way the course has evolved is that it is now far too choked with trees and scrubby undergrowth. The specimen trees are beautiful but the thick colonizing clag in between makes it quite a dark, enclosed course in places. Late in the day, the sun burst spectacularly through the heavy, overcast skies, but the sunbeams never had a chance to illuminate the fairways.

We rounded off the day with a brisk pair of 2-balls. Jeremy dusted off Dave (against the odds) and Alex and myself shared a closely contested halved match. Huntercombe was a joy and an essential visit for anyone with an interest in golf course design. Any architect who can replicate the enduring appeal of Huntercombe in their designs is onto a winner. I am sure we have all got some ideas in our lockers as a result of our trip. Hopefully, more EGD study trips will follow. I’d like to take them to Painswick. Now that will be an eye opener! 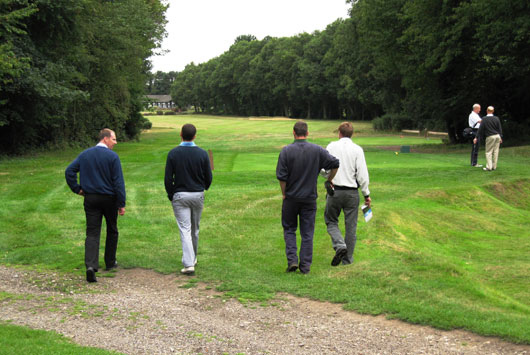 Above: Course Manager Neil McCarthy-Primett (left) explains the strategy of Hole 18 to Dave and Alex. 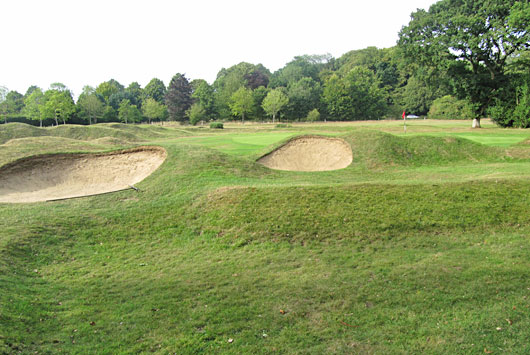 Above: Alpinised mounding and bunkers surround the green of the long par 3 7th hole.

Congratulations to @DubaiCreekGolf on reaching this milestone. We’re very proud to have payed a part in your huge success. Here’s to the next million! twitter.com/DubaiCreekGolf…

Obscene? I think you mean beautifully designed, particularly for an intelligent golfer...😉 twitter.com/ollycollis_/st…