A date with Monty

What do you say when the eight times winner of the European Tour Order of Merit asks you if you want a date? In Marrakech? Luckily, having momentarily wondered how our relationship had blossomed so much without me appreciating it, I realised that hed seen a plate of dates and was asking if I wanted one.

That minor confusion aside, the past couple of days I’ve spent with Colin Montgomerie in Marrakech have been great fun. We were there for the official public launch of a project were working on with him within sight of the famous walls of the old city, La Mamounia Hotel (where Winston Churchill used to stay) and the Koutoubia Menara. The location, in terms of access from the airport and to the city, couldn’t be better. The project is being developed by a company called Prestigia, based in Casablanca.

The launch started with a reception for about 100 people on the site and then shifted to Royal Golf de Marrakech, a beautiful and historic course set close to the royal gardens of Jardins de l’Agdal. A nine hole scramble, starting at dusk, meant that the fairways and greens were lit with lanterns and the players were all given luminous balls to play with as much as he was interested to see it, Monty somehow doubted this was going to ever be a feature of European Tour events. Then, back to the project for a buffet dinner and musical extravaganza before the prize-giving which started at about midnight.

If you’ve never been to Marrakech, give it a go. It’s an extraordinary place. 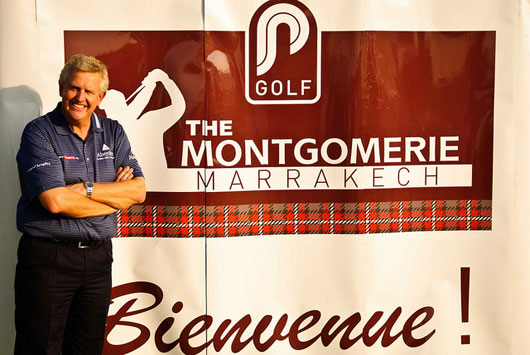 @montgomeriefdn @DPWorldTour @ADGolfChamps Play well this week, and for the season Colin. Best of luck!

Fintan is the most passionate custodian of @PortmarnockLink and just an all-round good bloke. Good to see him getting the recognition he deserves. twitter.com/GolfDigestIre/…

Played @JCBGolfCC in case you were wondering. Every shot. Every hole. twitter.com/RickShielsPGA/…

@JeffCarnage @ukgolfguy @CJ_Bertram @JCBGolfCC I remember that day Josh. It was fun to chat with you. Hope you’re well. RH

@oxfordgolfcons @CJ_Bertram @JCBGolfCC Yes it is. If the clubhouse was where we planned, there would be 500 metres less walking. Enough to make a difference I think. RH

Congratulations to @JCBGolfCC for achieving the accolade of Best New Course ranked in @NCG_com Top 100. twitter.com/NCG_com/status…

Press Release – EGD to honour Pete Dye at The Legacy Club - The Dye London is to be renamed The Legacy Club, and will be brought to completion by European Golf Design. Read more > egd.com/?page_id=631 pic.twitter.com/VOR2XXcXSO