The Road to Recovery

I’m in the fortunate position of being the webmaster for some of the world’s leading golfers and with the packed tournament schedule there is rarely a week that goes by when I’m not checking on results or glued to the TV screen over the weekend. Two of the players I deal with are Retief Goosen and Paul Casey, and both have struggled with injuries this year, Retief with his back and Paul with his toe. It’s great to see both of those players now coming back to form and hopefully finishing the season off strongly. Retief has big events coming up with the Presidents Cup in Melbourne and his home event, the South African Open, in Johannesburg. He’s won the event twice and narrowly missed out on the title last year after a close tussle with compatriot Ernie Els. For Paul he will be hoping to build on his fourth place finish in the HSBC Champions and end the season with good performances in the Chevron World Challenge and the season’s finale at the Dubai World Championship.

My interest in professional golf is not just with the players, I produce many of the on-course site plans for events on the European Tour. Not only is it a pleasure but also an insight into how much preparation goes into staging tournament golf. I’ve just completed the Dubai World Championship plans and looking forward to watching the top players battle it out for the 2011 Harry Vardon Trophy. 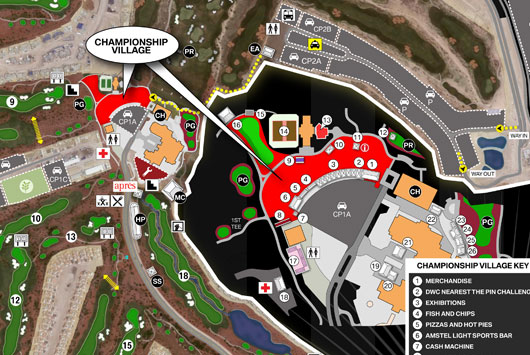 Above: Extract from the Dubai World Championship site plan.