Alister MacKenzie’s extraordinary par three twelfth at Sitwell Park, near Rotherham, South Yorkshire is arguably the most iconic ‘lost hole’. Except this is a lost hole with a difference. It is still there, sort of! It remains 140 yards long, just as MacKenzie planned, but MacKenzie’s extravagant green is long gone, replaced by a humble design that gives no hint that this was once a green of such repute and controversy, that it influenced the evolution of golf course architecture.

MacKenzie’s work for Sitwell Park was completed in 1913, early in his design career. The site was notable for a very steep, wooded hillside upon which the clubhouse was to be built. MacKenzie’s routing required that two greens, the twelfth and eighteenth, be sited adjacently, high upon this hillside and approached from below. The accepted wisdom would have been to form a basic cut and fill green terrace. MacKenzie knew that to do this would result in each green being sited high above the eye line, with a tremendously steep embankment fronting each green. The putting surfaces would certainly be hidden and this was not acceptable. Instead, he built a pair of wildly undulating, eccentric greens that tumbled down the hillside close to the existing gradient. Each green contained numerous small cut and fill terraces to create flatter areas, but woe betide the golfer who left their approach shot above the hole location! We’ll focus on the twelfth hole, as this is the green made famous by the iconic photograph, but the eighteenth was so similar in form that ever since it has been mistaken for its nearby twin.

MacKenzie’s twelfth green was an artistic triumph. He executed a construction that allowed the golfer a clear view of the putting surface and which amply rewarded an accurate approach shot. It looked magnificent and fitted seamlessly into the precipitous hillside. It was also a functional disaster, as for anything other than a precise approach, the fierce contours would repel the ball to points from which the club golfer would have a miserable time recovering. Golfers were embarrassed. And they hated it.

It was inevitable that such freakishly contoured greens would be criticised and a commentator from the Sheffield Telegraph printed comments that summed up what seem to have been widely held opinions. He wrote that these were greens which “all golfers of knowledge and experience will look upon with amazement, and which many will unhesitatingly condemn”. Further: “A number of undulations have been traced in the greens, which are, in many cases, far too deep, so deep in fact, that the ball putted from any direction will be found to reach the centre. The committee will be well advised not to pursue this policy of violence and severity in the contours and gradients of their greens.” And, he concluded: “Three putts will be the rule, and not the exception.”

MacKenzie was infuriated by this criticism and fired off a vigorous and eloquent defence of his design. “I have got accustomed to measuring the ultimate popularity of a hole or course by the amount of criticism it gives rise to in the first instance,” he wrote. “It is only natural that players who have been spoon fed on insipid, flat uninteresting golf should view with a considerable amount of suspicion anything which is undoubtedly out of the ordinary.

“Criticisms have been made that at Sitwell the putting is going to cost you more. The exact opposite is the case: the putting is going to cost less. It is inaccurate approaching that is going to cost you more. A man who has approached with great accuracy is helped towards the hole, and will frequently be down in one putt. I would ask my critics in what other way would it have been possible to utilise the terrific slope on which these greens are situated and yet to have given the same natural appearance? Unless the hollows were made large enough and deep enough it would be impossible for anyone putting from the top of the green to remain anywhere near the hole when placed in a hollow at the bottom, and in a green of this kind it is only intended that the hole should be placed in a hollow or on the flat.”

One cannot contradict MacKenzie’s opinion that accurate approach play deserves reward. However, in my view, MacKenzie was guilty of perfecting the form at the expense of the function. Even with greens mown with primitive technology, balls were running out of control. MacKenzie defied his doubters, but he couldn’t defy gravity and the twelfth green was doomed from the outset.

The Sheffield Telegraph critic responded with a fatefully accurate riposte: “I contend that the Sitwell Park committee will be obliged to change the shape of their greens almost as soon as they begin to settle down and become hard. In about three years time we shall know who is correct in his forecast. If I am proved wrong, and the greens meanwhile have not been altered, I shall apologise and confess I made a mistake. In the meantime, I stick to my guns, and contend that the work at Sitwell is a caricature of the legitimate efforts of modern course architects.”

History shows that this gentleman didn’t need to issue an apology. Apparently, the course was subsequently played by a number of prominent professionals, who roundly criticised the greens as unfair. The club committee capitulated and MacKenzie’s incredible greens were radically flattened and contracted. What emerged were the simple platforms that MacKenzie so strenuously avoided. MacKenzie’s pride was wounded and he later delivered a stinging rebuke to the club committee for making the course ‘dull and insipid’.

And that was that. They were gone. Consigned to history, but not forgotten, thanks to the photographer who took the historic snapshot. Initially printed in MacKenzie’s book Golf Architecture, this photograph has been the staple diet of golf design books ever since and continues to amaze to this day. Some have tried to replicate the green, perhaps most notably in modern times, Tom Doak and Brian Schneider, with their ‘Sitwell’ green at Barnbougle Dunes. One would be a fool to attempt an accurate replication, as modern green speeds would preclude you from finding even one sensible hole location on a green like this.

Many have wondered what became of the green, but few have made the trip to see. I did, once, on a bitingly cold January day. I knew it had been modified, but not the extent. It was shocking to see what it had become, but it was still possible to see remnants of MacKenzie’s old contouring. I recently got my brother, who lives nearby, to take a photo from as close as possible to the original location. His photograph clearly shows that much of MacKenzie’s original putting surface contouring still exists, albeit shrouded under a cloak of long, rough grass. It is a tantalising prospect to mow out the old green and recreate this old photograph, if even just for one special occasion. Sitwell Park celebrates its centenary in 2013. What a fitting tribute it would be to its original creator. GCA

Robin Hiseman is a golf course architect with European Golf Design, and responsible for the design of the Royal Golf Club, Bahrain, in association with Colin Montgomerie, Casa Serena in the Czech Republic and the future Club de Campo Tres Cantos, which was Spain’s proposed venue for the 2018 Ryder Cup. 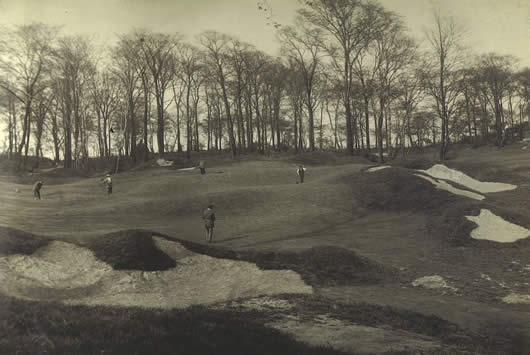 Above:The short lived green is still the most spectacular putting surface ever built. 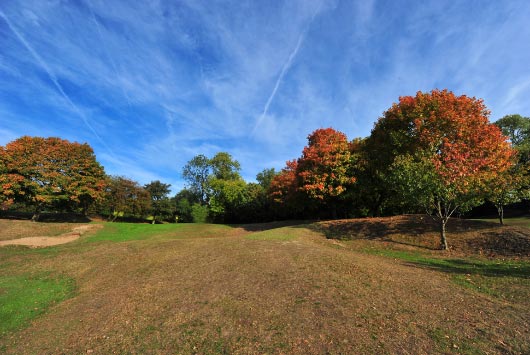 Above: Many of MacKenzie’s ridges and terraces are still apparent in Sept 2011.

Congratulations to @DubaiCreekGolf on reaching this milestone. We’re very proud to have payed a part in your huge success. Here’s to the next million! twitter.com/DubaiCreekGolf…

Obscene? I think you mean beautifully designed, particularly for an intelligent golfer...😉 twitter.com/ollycollis_/st…