As the wearer of the best moustache and ponytail combo in all of golf, Stan Eby is the stuff of legend. He has designed some of the greatest European courses of modern times – three have been named Best New Course of the Year by Golf World magazine: PGA Golf de Catalunya, The Faldo Course at Sporting Club Berlin and The Montgomerie at Carton House Golf Club. As well as those, he’s worked on some other fine courses – The Links Portmarnock, Euphoria Golf Estate in South Africa, The Schloss Course at Fleesensee outside Berlin to name but a few.

A quiet, relaxed, unassuming man, Stan is passionate, committed, demanding and precise when it comes to design. No-one works a site harder, no-one demands more of a project team. At the same time, no-one expects more of himself. Not known for his exuberance, Stan’s humour borders on arid. But it’s always there. Of the many stories about Stan, I’ve two favourites:

He and I spent time walking a beautiful coastal site in Turkey. It had everything – full access to the beach, dunes, rolling terrain, vegetation, ample space, ample water and outline planning already in place. In short, it was easily the best site I’d seen in years. After two days on site, Stan’s assessment was simple and plain: “Not bad”. And that was it. Nothing more. On the other hand, that was also the most positive reaction I saw from him of any site we ever looked at together.

The other story shall involve a client who, for obvious reasons, shall remain unidentified. During a project meeting, the client launched into a thirty minute monologue about what he expected from the site, from the project team, from the project (all of which were, to say the least, ambitious expectations), at the end of which he turned to Stan and said “Stan, are you listening? Am I making sense?” Stan thought for a few seconds then replied “I’m listening and you’re not.”

Stan retired a couple of months ago but has remained in the UK while he tidied up his affairs. He leaves to go home to the US on Thursday. We will all miss him. We’re all grateful for the contribution he has made to the company, and to each of us. Each of us is the better for having had the pleasure of working with him and I know everyone here wishes him much happiness for the future. We also hope this is not goodbye. 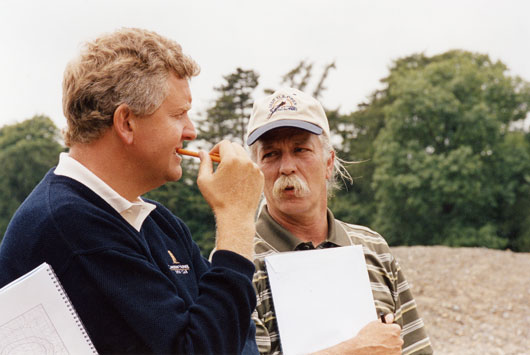 Above: Colin Montgomerie on site with Stan Eby at Carton House, Ireland.

European Golf Design have been honoured to work with the Evian Resort for nearly 10 years now, and what a pleasure it has been. Read more about the new Par 3 Course on Dave Sampson's blog here egd.com/?p=2877 pic.twitter.com/2uuN1JjkeB

Great to be featured on our parent company the European Tour's website this week. europeantour.com/european-tou…

Had a delightful knock around @GolfShgc this morning. Considering the weather we’ve had the course is in remarkable condition. Four ball - 2h20. What’s not to like about that? No handshakes, no high fives, and we hit it wide enough that there was always at least 2m of separation!