Design Influences from the Past

Since studying for a VQ with the European Institute of Golf Course Architects I have become familiar with the design work of a Philadelphian named Albert Warren Tillinghast. Known affectionately by his friends as ‘Tillie’, he is recognised by many as one of the most colourful and outlandish characters of the games’ history.

After his death in 1942, for more than 30 years Tillie became a forgotten man. It was not until 1973 when Frank Hannigan and his colleagues from the USGA realised that four of their ten tournaments in 1974 would be played on Tillinghast courses. His story would finally be told.

Albert Warren Tillinghast was born in Frankford, Philadelphia on May 7, 1874. His father founded and managed a very successful rubber company operating plants in Philadelphia and Baltimore. Albert grew up with little discipline and was largely left to his own devices, he never lasted long at any school he attended and spent much of his time playing a street version of rugby with local gangs.

After a few years playing cricket, Tillingast eventually fell in love with the game of golf. During the 1890’s he travelled to Scotland with his family. It was here that he met and received golf lessons from Old Tom Morris, he went on to become a very established player and featured in many of the early majors. 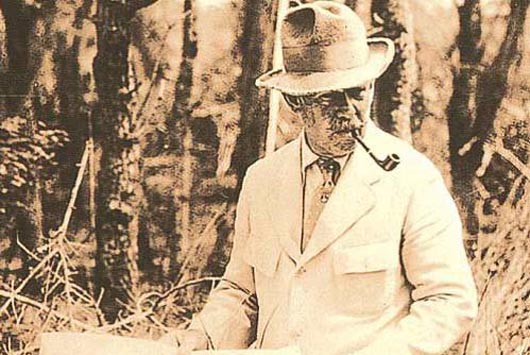 Above: Tillinghast in the undergrowth

Tillinghast returned to the US. He was married at the age of 20 and became a typical sporting gentleman of the ‘roaring twenties’; he was a heavy drinker, lavish spender, master talker, flashy dresser and talented pianist. His magnificent waxed moustache became his trademark.

In 1907 a family friend named Charles Worthington invited Tillinghast to lay out a course on the Delaware River at Shawnee. The course proved an instant success and although it was not hugely influential at the time, it was whilst working on this project that, at 32 years of age, he had found a career.

Tillinghast was part of what has become known as the Philadelphian School of design. In the years leading up until World War I a group of men from Pennsylvania dreamed of building first rate golf courses and went on to do so. The other primary members of this group were William Fownes, George Crump, Hugh Wilson, George Thomas and William Flynn. They often met and discussed course design. One of George Crump’s most famous holes, the 7th at Pine Valley, or Hell’s Half Acre as it is known, is often accredited to Tillinghast. 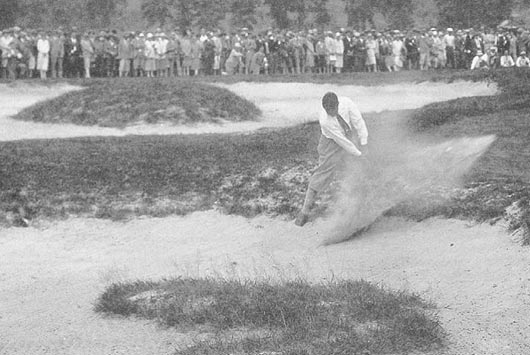 Above: Bobby Jones plays from greenside bunker on Baltusrol’s 17th hole in 1926

Tillinghast also wrote on the subject of course design extensively for Golf Illustrated, the American Golfer, the PGA of America and numerous other leading journals of his era. It is widely thought that many of his design principles formed the foundation for the development of the golf courses we see today.

In 1937, Tillinghast moved to Beverley Hills, California, where he opened an antique shop. He started off selling personal belongings that he and his wife had collected over the years. After a couple years trading it is said that a majority of the movie stars either knew him well or bought from him.

Albert Warren Tillinghast had a fatal heart attack on May 19, 1942. He was buried at the Woodlawn Cemetery in Toledo, Ohio.

All though by no means a prolific designer, Tillinghast is regarded by many as the best of his era. The sheer number of national and international tournaments that have been held on Tillinghast courses is testament to the quality of his design work. Bethpage, Baltusrol and Winged Foot have all hosted recent major championships.

I am confident, whether they are aware of it or not, that every golf course architect operating today has been influenced, at some point, by the work of Albert Warren Tillinghast.