Phase 2 construction work in preparation for the new major on the LPGA tour is well underway and the proposed changes to the course are now starting to take shape.

The most notable changes to the golf course layout will take place on golf holes 5, which has been converted from an uphill par 4 to a dramatic one-shotter played over water, and the final four holes, where we are creating a ‘stadium-like’ amphitheatre around the new green complexes 15, 16 & 18.

In terms of the actual golf course features, the previously small and undulating greens are being replaced by larger greens with many more pin locations. The beauty behind the majority of the new greens is that not only will they reward pinpoint accuracy but they are also designed to be receptive to shots that are played along the ground, ensuring that the golfer always has multiple options in which to attack any pin position.

The new bunker styles are designed to be more of a deterrent and penalty, replacing the large & flat bunkers of the past. They will have a more natural and ‘ragged’ edge to them, and will be smaller and deeper, more in scale and proportion to the narrow tree-lined golf holes in which they will sit.

Additional and larger tees have been added to most of the golf holes allowing for more flexibility in the course setup.

To increase the drama and climax of the course, additional water features have been added, mainly to the closing golf holes. As mentioned above, Hole 5 will now be played over a large lake, while the new short 16th will be played downhill, to a raised green which sits above a new cascading stream system. The existing stream feature which use to front the 18th green has now been made into a much larger pond feature which will protect the new raised green. The water features are designed to serve both aesthetic and functional storage purposes.

The ultimate intention at Evian is to create a course with much more variety and choice. 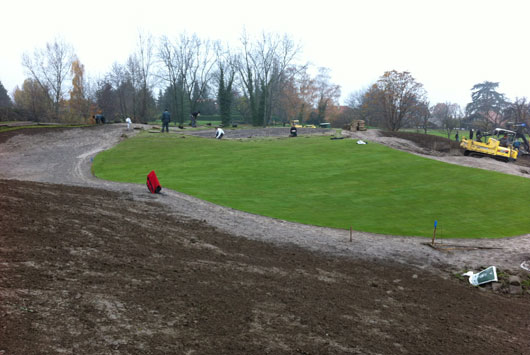