How to construct a revetted bunker

Have you ever wanted to build your own revetted bunker? Well now is your chance, below is a rough guide, if you would like more detailed information, please do not hesitate to contact us!

Working in vicinity of irrigation systems and other services
This is important! Check you are not working near irrigation lines or other services. If you are, mark them with clearly with flags or something similar.

Bunker Locations and Topsoil Stripping
The location and elevations should be clearly marked using stakes and paint. Remove the turf and store it if it is in good enough condition to be reused. After this the topsoil can be stripped and stockpiled.

Shaping and Subgrade
Bunker Complexes include the bunker site and adjacent mounds and hollows. The shaping is normally carried out using a backhoe with swivel bucket or small excavator. The final shaping needs to direct water away from the bunker as erosion and contamination of sand is costly. All bunker subgrade should be properly graded, raked, free from all weeds, compacted and be shaped to a uniform level 100mm below the desired finished grade.

Revetting the bunker
The turf may now be placed around the bunker edge. Start by laying the bottom layer around the base of the bunker. The slabs should be laid one on top of the other (offset like brickwork) until the desired height is reached. As a general guide, greenside bunkers should be at an angle of 135°. To achieve this each slab should be laid 40mm further back than its predecessor. For fairway bunkers a slightly more forgivable face angle of 145° is desirable (slabs laid 60mm behind each other). It should be noted that if the face is too steep it is likely to collapse. As the turf is laid, the over excavated area should be filled using native material. The bunker construction detail illustrates this clearly. The turf should be laid around the extremity of the bunker shape gradually getting lower until the desired back lip height is reached, this should be low enough so all golfers can step in and out of the bunker easily.

Drainage
The next step is to excavate a hole for the soakaway. This should be dug by hand in the lowest part of the bunker and measure 1m³ (this may be adjusted in accordance with the surface area of the bunker). If perorated pipe is required then It should be installed using the herringbone method prior laying the turf slabs.

Coring
– The bunker floors should be cleaned out and graded smooth. All cuttings from coring and edging should be removed along with any stones that lie on the bunker floor and edging.
– No ridges or barriers shall remain on the subgrade that inhibits the flow of water. The final phase of coring is the compaction of the bunker floor, this may be done manually or mechanically.
– The stockpiled topsoil should then be re-distributed around the bunker to a level consistent with the existing golf course and the specified turf can then be laid up to the revetted edge.

Sand Placement
On completion sand should be placed in the bunker to a finished depth of 100mm. Layers no more than 50mm deep should be raked into place and compacted. The sand at the sides can be a little deeper to prevent the ball getting trapped at a right angle between the revetted face and sand.

The construction detail and photo below should make the above a little clearer! 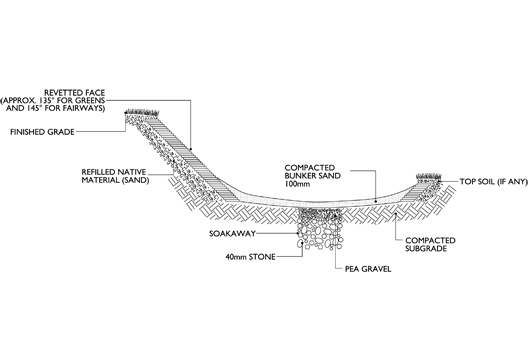 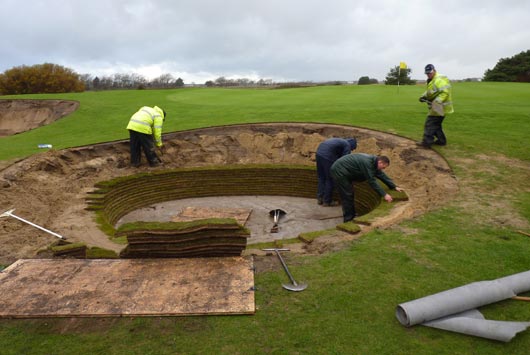 Above: Revetted bunker during construction