How refreshing will it be to see a major golf tournament being played on a course under 7000 yards? Personally, I think it is and the USGA should be applauded for it!

It’s been 32 years since the USGA took their national championship to the famed Merion GC, so the course will be a bit of mystery to most. The plot of land is small at 127 acres and the spectator experience will be akin to an Open Championship at the Old Course St Andrews, but this tournament is the US Open, so you know the test is going to be tough!

The course is renowned for being ‘tricky’ and with the only two par 5’s coming in the first four holes, birdies will need to be made early and scores held onto for the remaining fourteen. Setup would have undoubtedly been firm and fast, but the heavy rain over the past week has unfortunately put an end to that. On the flip side however, the rough will be now be even more brutal than usual and the fairways will in all probability be even narrower than their usual ‘pencil thin’, but hopefully not too narrow that the bunkers seem detached. With the course playing soft, the famous wicker basket pins will most definitely be hidden away to protect the course and likely threat of low scores. (Click on link to the USGA website for a fantastic fly through of each hole) http://www.usopen.com/en_US/course/index.html

From a course design point of view it’s going to be a fascinating watch to see how the best players in the world approach the challenge and strategise their way round. Will Tiger employ a similar strategy to the one which won him the Open Championship at Hoylake in 2006, where he took an iron from nearly every tee? On paper, it must offer up the best chance of a first major success to some of the game’s shorter hitters like Luke Donald, Matteo Mannaserro & Matt Kuchar? Perhaps it will be the year for the Steve Stricker!! But as a man who likes the odd flutter, Graeme McDowell must have a great chance!

Nonetheless, whoever the champion come Sunday, I can’t wait to see how the course stands up…..could this become the new template for championship golf?? 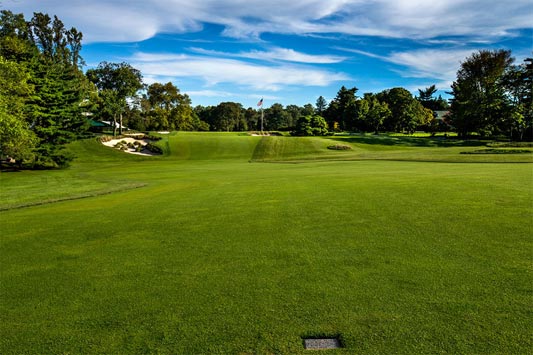