Set within open parkland the Montgomerie Course has the feel of an inland links, and is characterised by steep faced bunkering as well as dramatic swales and contouring around the greens. It is a very strategic, thinking man’s golf course which demands accurate shot placement as poor shots will tend to be swept away from target areas and towards the penal bunkers.

This is the third time in the last nine years that the Irish Open has been staged on the Montgomerie Course, which was named as the “Best New Design of the Year” in 2004 by Golf World. To add to its tournament credentials the course has also successfully hosted the 2004 Irish Amateur Open Championship, the 2010 Irish Seniors open and the 2012 European Amateur Championship.

The Irish Open is the first of two European Tour events which will be staged this year on Colin Montgomerie/European Golf Design courses. The other will be at The Montgomerie Maxx Royal in Turkey for the Turkish Airlines Open, part of the inaugural Final Series of The European Tour’s Race to Dubai.

You can find out more about the 2013 Irish Open at http://www.golf.discoverireland.ie/Irish-Open/Home/ 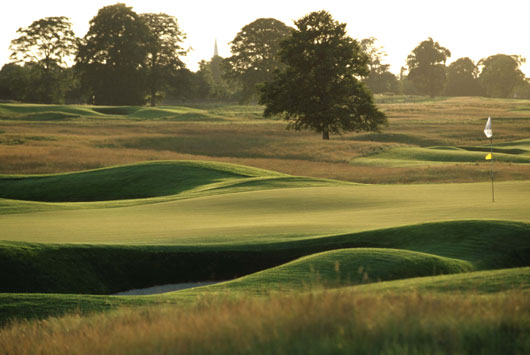 Above: The 12th hole on the Montgomerie Course