This weekend’s win for Paul Casey at the Irish Open was significant for two reasons. Firstly it marked the return to form for one of England’s most popular golfers, and secondly, he became a two time winner on courses designed by Colin Montgomerie in association with European Golf Design.

The Irish Open returned to the Montgomerie Course at Carton House for the third time, having previously staged the event in 2005 and 2006. The course, which opened in 2004, is often described as an ‘inland links’, characterised by its steep faced, penal bunkering and dramatic swales and contouring on and around the greens. Paul Casey showed an early liking for the course in 2006 when he finished runner up to Thomas Bjorn, losing by just one shot after three putting the last green. He more than made up for that this year by holing a monster putt for an eagle three on the 72nd hole to confirm his first victory since 2011.

That last win came at the inaugural Volvo Golf Champions at the Royal Golf Club at Riffa Views in Bahrain. As at Carton House, the Montgomerie Course at Riffa Views was designed to provide a links style golf experience, but this time in a desert environment, with fast running fairways and open approaches into huge, firm greens which are dramatically contoured. It is clearly a style which suits Paul Casey’s game.

So, if you’re wondering where Paul’s next win might come, then our tip would be to look no further than the Turkish Airlines Open which will be played at The Montgomerie Maxx Royal in November as part of the exciting Final Series of The European Tour’s Race to Dubai. 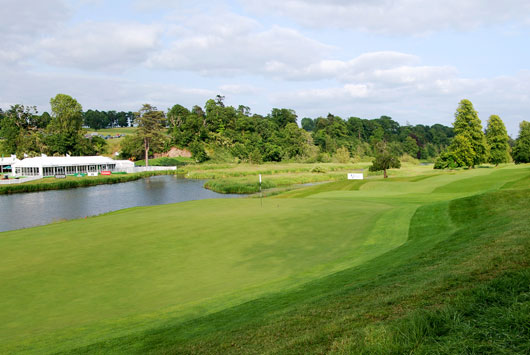 Above: The 18th green on the Montgomerie Course