In these harsh economic times it is nice to be able to report on a golf course opening, even if it is one with which we have not had a design involvement. Such is the case with the unveiling of the new Kilmore 9 holes at Carne Golf Links in Belmullet, County Mayo, Ireland.

I must declare a personal interest in the course, as I am an overseas life member of Belmullet Golf Club. One of the key incentives for me joining was the prospect of this new 9 holes being developed through the most incredible dunes I have ever seen. I was shown a draft plan back in 2006, which had been prepared by one time EGD designer, Jim Engh. The course that has finally emerged some seven years later is much revised from this initial sketch and has, in the later stages of development, been spearheaded by a good friend of EGD, Mr. Ally McIntosh.

Whilst Ally has fronted the design of the new course, it only exists because of the willpower and dedication of one man, Carne’s Eamon Mangan. Eamon was the inspiration and the driving force behind developing the new holes, despite Ireland’s crushing recession. The holes have been built on the tightest of shoestring budgets, reportedly just €140,000. Work could only be carried out when there was money in the kitty to allow it, which meant that for long periods the fledgling links lay deserted. On more than one occasion I looked out over the new course and doubted that it would ever be finished, but with Eamon’s dedication and Ally’s design eye, the course was finally unveiled for play on Tuesday July 23 2013.

The entire Carne development is a good news story. This is a modern links, dating only from the mid 90’s, developed by the community as a tourism incentive. It was the last course to be designed by the great Eddie Hackett, whose light touch has left in place some outlandish fairway contouring that other more heavy handed architects may have flattened in the pursuit of fairness. The story of how the course came to fruition is succinctly captured by Richard Phinney and Scott Whitley in their excellent book, ‘Links of Heaven’. How the locals rallied together at the eleventh hour to purchase the links from seventeen separate landowners, each with a government grant to fence in their strip of duneland with five rows of barbed wire, is a story of devout community spirit and foresight. Their reward is a magnificent course, ranked consistently within the top 50 courses in Great Britain & Ireland. If ever a course was worthy of making a concerted effort to play, Carne is it. Nobody arrives in Belmullet by mistake and this amazing links at the very edge of the continent, makes the long, lonely drive across the dark peat moors of Mayo thoroughly worthwhile.

Carne now has twenty-seven of the most dramatic, natural duneland holes in the World. With such a minimal budget, the necessity was to use the lie of the land wherever possible and it is with great skill that the new 9 wends its way between and over dunes of epic proportions. It is thrilling golf, raw in form and with stern consequences for waywardness. The hand of man is evident only in the location of the few bunkers that punctuate the course and the sporty, turbulent green surfaces, that will be great fun to putt on once they have fully matured. One minute you are playing through narrow clefts between immense sand hills, fully 100-feet high. The next you have ascended to a pulpit tee, seemingly on the roof of the World, with incredible views across the dunes to Blacksod Bay, the Atlantic Ocean and the islands that pepper the horizon. Golf really can be this great. It is a lesson to all of us who design for a living.

The course is still admittedly something of a rough cut. Given some maturity it will become a polished diamond and further cement Carne’s growing global reputation. Eamon, Ally and all at Carne should be immensely proud of their achievements. It is superb.

Above: This giant blow out bunker is the key feature of this drop shot par 3 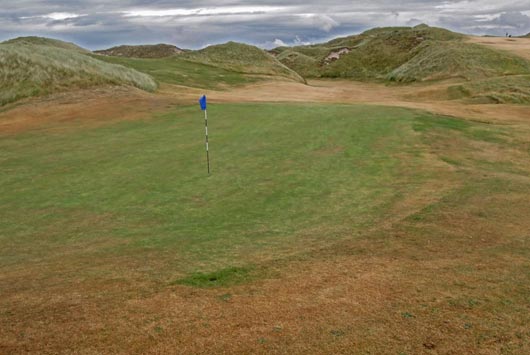 Above: Second shot on this par 5 is played over giant dune above the flagstick! 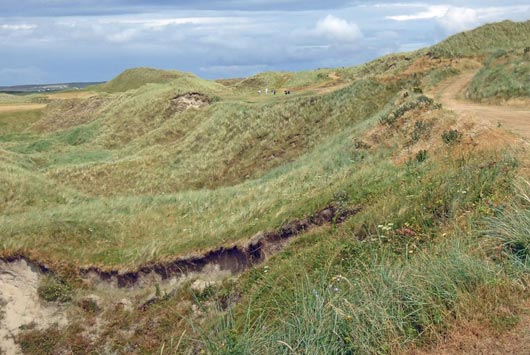 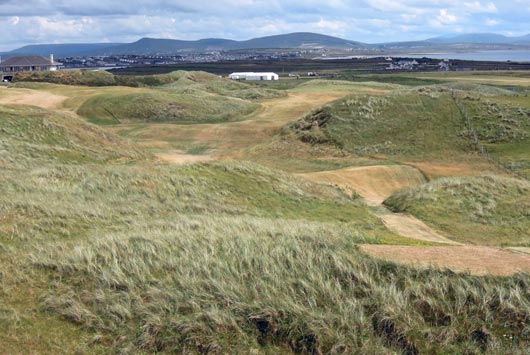 Above: This stunning view is the reward for the steep ascent to the 9th tee