The Evian Championship – The ‘New’ major on the LPGA tour

In the lead up to this week’s ‘New’ major, the designers of the course redevelopment, European Golf Design, provide some interesting ‘numbers’ on the just what was undertaken in preparing the course for its new ‘major’ status.

6428 – The total number of yards from the championship tees

71 – The new par of the Evian golf course. The most significant changes to the course have been in the redesign of the 5th hole from a par 4 to a par 3; the 13th has been extended to a reachable par 5; the 16th is now the short par 3 and the 17th a par 4; while the 18th has been changed from a short par 5 into the longest and most demanding par 4 on the course.

77 – The number of new bunkers on the course. The previous large flat bunkers have been replaced by a smaller, deeper and more challenging bunker style.

20 – The number of greens which have been redesigned and rebuilt. On average, the greens have increased in size by up to 40%, allowing for more flexibility in pin position opportunities and more undulation within the putting surfaces.

19 – This week’s Evian Championship (Sept. 12-15), is the 19th edition of this women’s golf tournament, which this year becomes the fifth and final major on the LPGA Tour.

176 – The number of new trees planted around the course

For more information on what exactly took place during the past year’s construction, click on the video link below from this month’s CNN Living Golf programme

And for all the latest news and tournament information, visit the tournament website 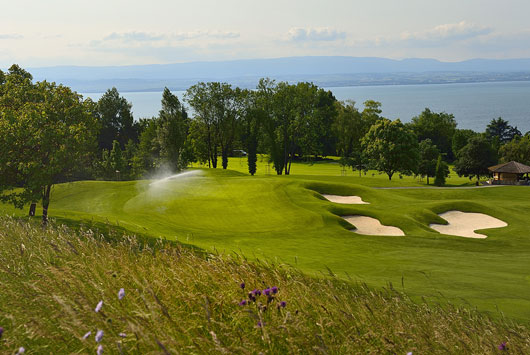 Above: The 14th Hole at Evian