Return of the Bolton Wonder

We have received many admiring comments about the clay model made of the new course we’re designing for JCB…and rightly so. It is a wonderful piece of craftsmanship. The man responsible for the model is Jeff Shuttleworth, from Bolton and he deserves all of the plaudits. 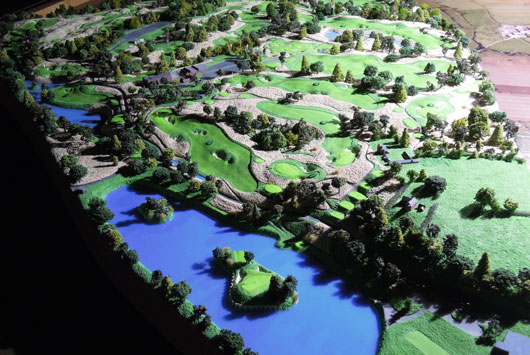 The idea for the model came from JCB Chairman Lord Bamford. He’s not a fan of computer generated imagery and prefers the tactile, three dimensional qualities of a good model. He felt that the golf course proposal could be more amply appreciated and understood if people were able to get up close to and walk around a large scale site model. He was proved to be right.

EGD was asked to suggest a model maker and I immediately recalled this chap who had made a fantastic single-hole model for us back in the days when I used to work for Hawtree. This was nearly twenty years ago though and both his name and company details had long since escaped me. I turned to the one person who I thought may just remember him, my former design colleague, Mike Cox. Remarkably, Mike not only remembered him, but had done some work with him in recent years. The only problem was, as Mike told me, that Jeff had retired from professional model making several years ago. Nothing ventured, nothing gained, so I gave Jeff a call and left a message on his answer phone, explaining what we had in mind.

Later that day, Jeff called back, sounding somewhat surprised and said that he’d be very keen to look at the job, but that he’d thrown away his model making tools, thinking he’d never be needing them again! Things move quickly and efficiently when you deal with JCB and shortly thereafter, Jeff was engaged to produce the model in time for a public exhibition and press launch in January 2014. This gave Jeff two months to complete a task that needed three! It also forced us to accelerate our design schedule, as Jeff’s model is scaled to our detailed 1:1000 plans, which weren’t due to be completed until Christmas 2013. 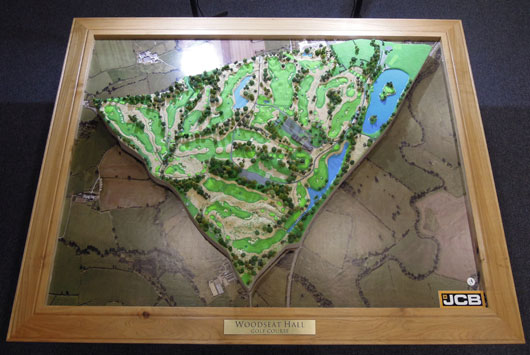 Necessity is the mother of invention and to cut a long story short, we pumped out the design plans in double quick time and Jeff exceeded all expectations of him and delivered the completed model in good time, working 18-20 hours a day, all through December and the Christmas holidays.

There was a palpable sense of excitement when the model was unveiled and it was, for me, immensely rewarding to see the design of our course so accurately portrayed. Jeff is very particular about how the model should be lit to accentuate the shadows and contours. Keep the lighting at a low angle and from one position only. In these conditions, the model springs to life, highlighting every bump and hollow. Jeff’s attention to detail is incredible and you can spend hours gazing over the model. It is quite mesmerising.

It’s been a thrill to see the model take shape under Jeff’s skilled hand. He’s lost none of the magic and if there is any justice, he should find himself with a few more to do in the future. JCB are thrilled with his work and so are we. Photographs of the model have formed the centrepiece of the worldwide press coverage, explaining what the course will look like better than any computer rendering or sketch can do.

The model sits for now in the JCB executive offices, but in time it is envisaged that it will reside in the foyer of the new clubhouse at Woodseat Hall. Hopefully, you might get to see it there, but for now, here are a few photos of Jeff’s fantastic work. 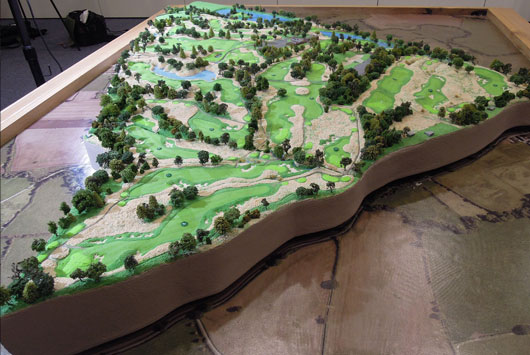