A few weeks back, seven friends and I made a golfing pilgrimage to the home of golf. For some in the group, this was their first experience of St Andrews and the main aim was securing two tee times in the Old Course ballot.

For most, this annual golfing competition is one the highlights of the year. Four rounds of golf, three nights of party…..a pretty decent recipe for a good time!

Onto the golf, the first round took place over the Balcomie Links at Crail. Once a squally shower passed through just minutes before our tee times, we were treated to a gloriously sunny afternoon. In general, the golf was pretty decent, and the course was in good condition. In terms of the holes themselves, there are some really good holes, most notably the par 4 5th, which wraps its way around a bay. Unfortunately, there are a few too many average holes, however, the setting is fantastic, which more than makes up.

The day before the trip we found out that only one of the four balls had been successful in the Old Course ballot for the second days’ golf, with three of the successful four having played the course before. Unfortunately however, the ‘three’ were permitted from swapping places with the Old Course ‘virgins’. Nonetheless, the unfortunate four ball decided to queue up early the next morning and chance their arms (resulting in a relatively ‘quiet’ first night). Little did they know that they would be attempting on what turned out to be the course’s busiest day of the year! Arriving at 5:45am, they were 43-46 in the queue (no 1 arrived at 11:30pm the night before…so much was the demand!) At 7:30am, they threw in the towels and headed for a round on the New Course.

With four of us on the Old and four on the New, we decided that day two could not count towards the ‘Cup’. Being one of the fortunate four on the Old, I was grateful for another opportunity to play and further examine / study / experience the Old Course. It definitely does helps when you play well, but as per my last and only other game, I once again walked off thinking, ‘This place is great’!!!

After two days of calm, we awoke to a stiff morning breeze on Day 3. The breakfast banter was all about embracing the conditions and looking forward to the challenge….some were even ‘glad’ they would now get the ‘proper’ links experience. Needless to say, after just a few holes on the Jubilee, not many of us were as ‘embracing’, with one of the ‘links’ course novices exclaiming….’I just don’t get how people can love links golf?!’ (he wasn’t saying that after 38 points on day 1 though) Stableford scores plummeted and the high points from day 1 were now a distant memory. So, with golfing egos out the window and tails between respective legs, we headed off the ‘Jigger’ to drink away our golfing blues.

As morning broke on the final day, the day / night before had clearly taken some casualties… (I being the worst hit – for which I was duly awarded the MVP prize!) But this was ‘pay day’….a year’s worth of bragging rights – a year of being called ‘Champ’!!

Our final examination was set for the New Course, with the same stiff breeze from day 3, further adding to the challenge. Scoring was once again difficult (i.e. poor) and coming down the final few holes we had a feeling that the scores were going to be close….and so it turned out! Over three rounds of stableford competition, first to last were covered by a mere 6 points….with the winner being a fine gentleman called Greg Betz.

(On a personal note, the head unfortunately only seemed to ‘clear’ on the 9th tee, with the first 8 holes being relegated to a mere blur! Not even a late back nine rally and a birdie on the 18th could propel me to the top of the leaderboard…..but everyone had similar tales of woe!)

A truly memorable few days up in St Andrews was had by all – Great golf in a great place with good friends = Good times! 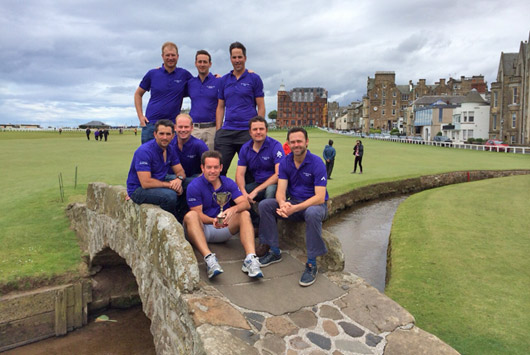 Despite a round trip of around 750km, on a Saturday, some work days are infinitely better than others! pic.twitter.com/Vaf2H56KJd

Very proud of the design work we did there with Bernhard Langer. Hope the players enjoy the challenge and good luck to @Greenstester and his team! twitter.com/Challenge_Tour…

Follow the link for an excellent course tour and club profile of our @JCBGolfCC, in the company of @SophWalks, with insightful contributions from @johnhowellsgolf and @CallumWark. Just 18 minutes long. Perfect for a coffee break. twitter.com/HowDidiDo/stat…