A return to the Evian Championship

I returned to Evian for the first time since the inaugural Evian Championship in September 2013 (formerly the Evian Masters), and was glad to see how much the course had improved over the past year.
Conditions during both construction and last year’s tournament were unseasonably extreme, with excessive snow being encountered through the winter build, and torrential rain during the tournament causing the championship to be reduced to 54 holes.

A year on, and the course has come on significantly. After the previous year’s travails, drainage improvements have been carried out in-house over the past year, and these have further assisted with the overall improved turf quality, course setup and presentation throughout.

In terms of a ‘major’ tournament experience, the golf club have made great strides on this front. The purchasing of a narrow strip of land above the right side of the short par 3 16th has provided the event with improved spectator & hospitality platforms around the newly termed, Evian ‘Puzzle’ (Holes, 5, 15, 16 & 18) . Also improved is the seating amphitheatre behind 18 green which has been steepened slightly to improve viewing down over the green complex.

The Golf Club is extremely proactive and forward thinking, with further additions and improvements planned for next year, most notably, a full length cart path system. On the course front, drainage improvements will be ongoing and minor amendments to a couple of greens may also be carried out.

Finally, this year’s tournament, played in much more favourable sunny and firm conditions, was won by the 19 year old South Korean, Hjo Joo Kim. Her winning score of 273 (11 under par), amazingly contained a record low score for a major of 61 (10 under) on day one. Many congratulations to her and everyone else who made this year’s championship such a success. 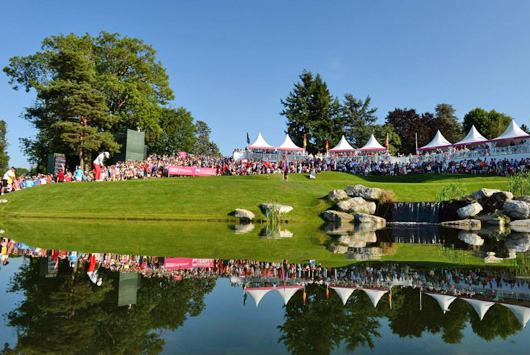 Above: The 16th Hole at Evian