A Fleeting Glance – How the island hole came to JC…be. Part 1. 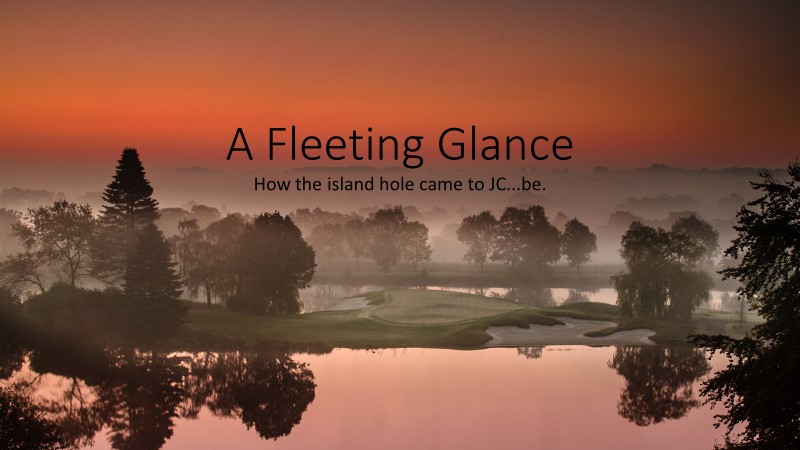 I hate it. Absolutely detest it. The term ‘signature hole’. The suggestion of one hole above all others. And yet, for the JCB golf course, we designed a par 3 17th hole, which could serve as the definition of the term. Understanding it would be the ‘signature hole’ actually helped with the design of the other holes, as it was essential the 17th sat comfortably within a strong, thematic composition, rather than being encountered as a maverick, aesthetic freak. It’s the hole everyone talks about and looks forward to playing, but there are plenty of engaging and strategic golf holes to enjoy before reaching this spectacular finale.

This is the story of how the 17th hole at the JCB Golf & Country Club was discovered, designed and built and how a fleeting glance led to the creation of a unique and extraordinary golf hole.

The late 1960’s was a period of rapid growth for JCB. Since 1950, when founder, J C Bamford set up premises in an old cheese factory, in Rocester, the company HQ had expanded massively to accommodate flourishing production lines. Mr. Bamford also bought up the land surrounding the factory and created a series of large ornamental lakes, around which landscaped pathways were routed, where employees could relax during their lunch breaks. In the middle of South Lake, he created an island, upon which ornamental tree saplings were planted, including Weeping Willow, English Oak, Norway Spruce and an exquisite Dawn Redwood. For decade upon decade this island sat quietly, with the trees slowing maturing and adding beauty to the landscape. Birds nested on the peaceful islet and fishermen gazed idly upon it, but for the most part, nobody gave it much thought. 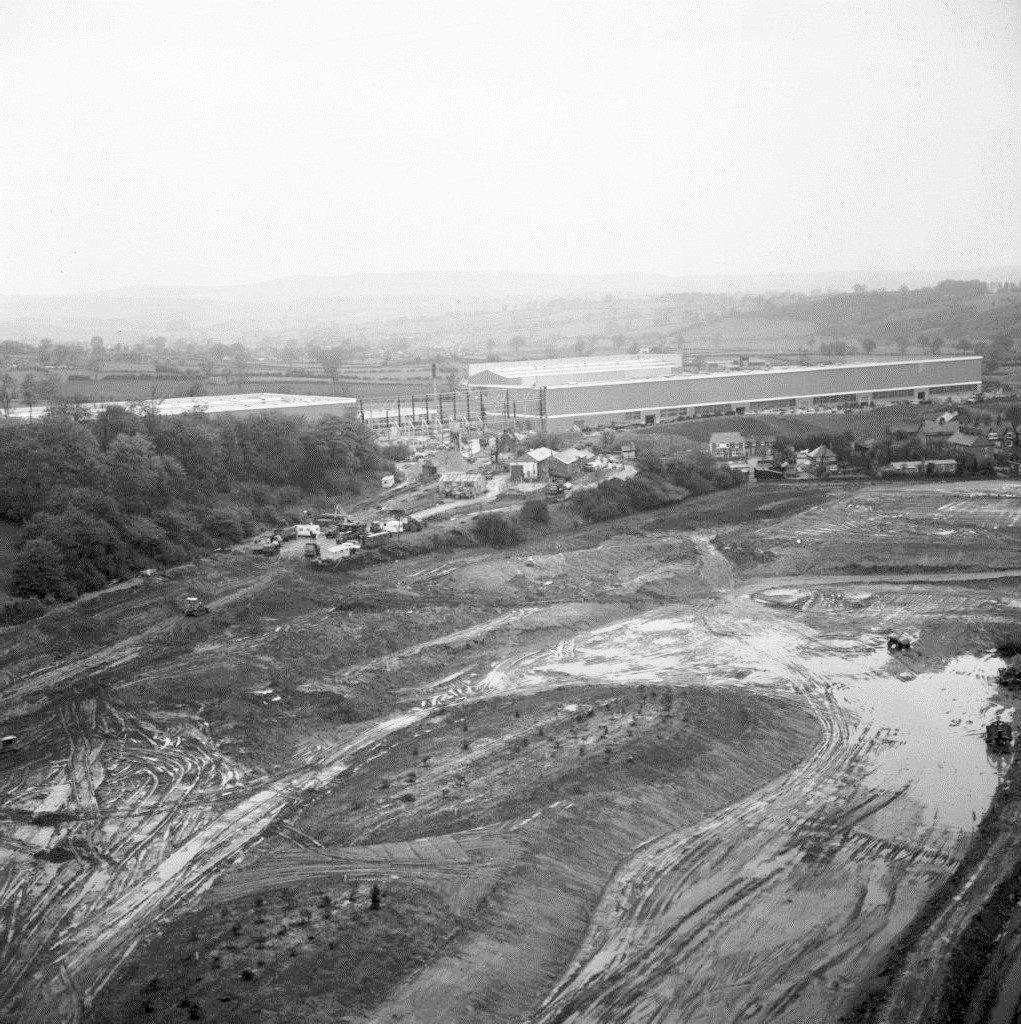 Above: South Lake and the island being built in the late 1960’s. The trackbed, buildings and goods yard of the disused Rocester railway station still evident in front of the expanding JCB factory. No trace of the railway remains today.

It was the briefest of glances. No more than that. It was November 2012 and I was at JCB to check out the routing plan for EGD’s new and at that time, highly secret golf course proposal. Standing on the proposed 18th tee, I glanced to the left and noticed a tiny sliver of water through the autumnal foliage. I took a photograph, thinking it would be nice to lift the canopy and give golfers a view of the lake. Wandering over, I peered through the branches to take a closer look. Beyond the trees was a steeply descending grass bank, overlooking South Lake far below. In the middle of the lake, perfectly lined up with my viewpoint, was a wide, shallow island, covered in mature trees and laurel bushes. This demanded closer inspection. I climbed over the fence, ducked under the branches and took in the full, unobstructed view. Instantly, the thought popped into my head, ‘I reckon I could hit one onto that island’. An instant later, ‘that would be an amazing golf hole’. Right before me was the raw material for one of the World’s most spectacular par 3’s and I was the first person to ever see it in this light. 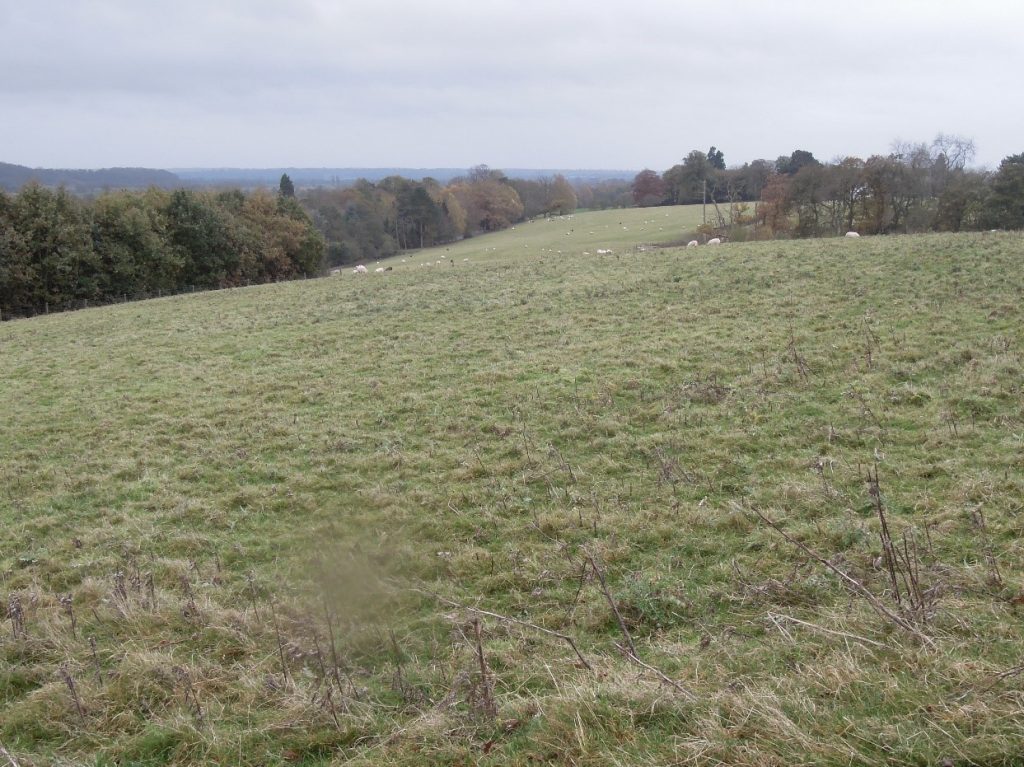 Above: November 2012: The intended tee view for the 18th hole, which would have played to the end of the distant field. 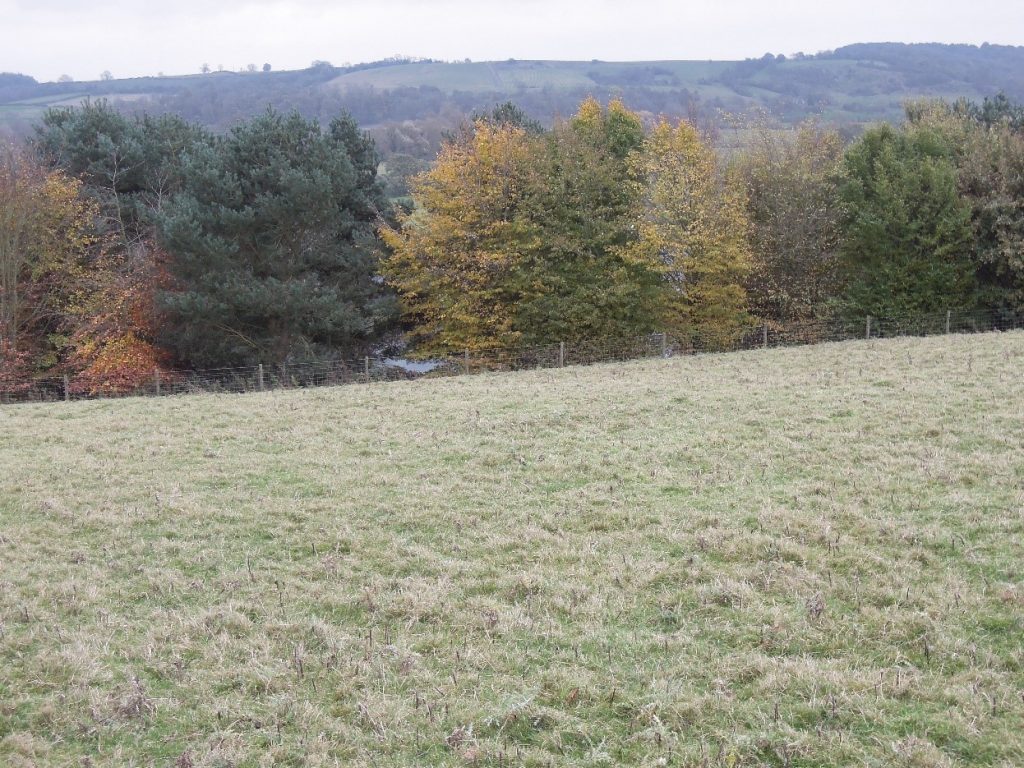 Above: And this is the sliver of lake I saw through the trees… 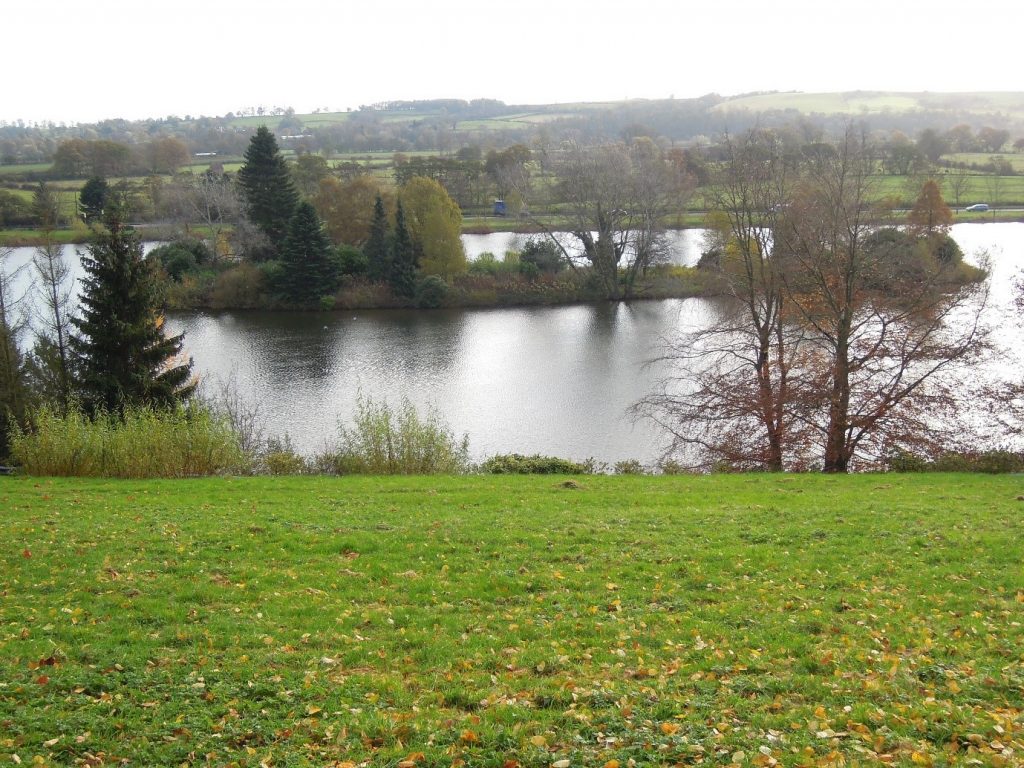 Above: November 2012: That first view of the island.

There was a problem. The island was beyond the project boundary. JCB would have to be persuaded to let us expand the development site. Fortunately, we were dealing with people in the factory who had the vision of creating a world class golf course with which to boost JCB’s global profile. Presented with some sketches and a bit of blarney, they appreciated how the stars had aligned to offer us this island in the perfect location and the perfect point in the round (the 17th), to create an iconic, unique hole. They signed off on the concept and we were up and running. 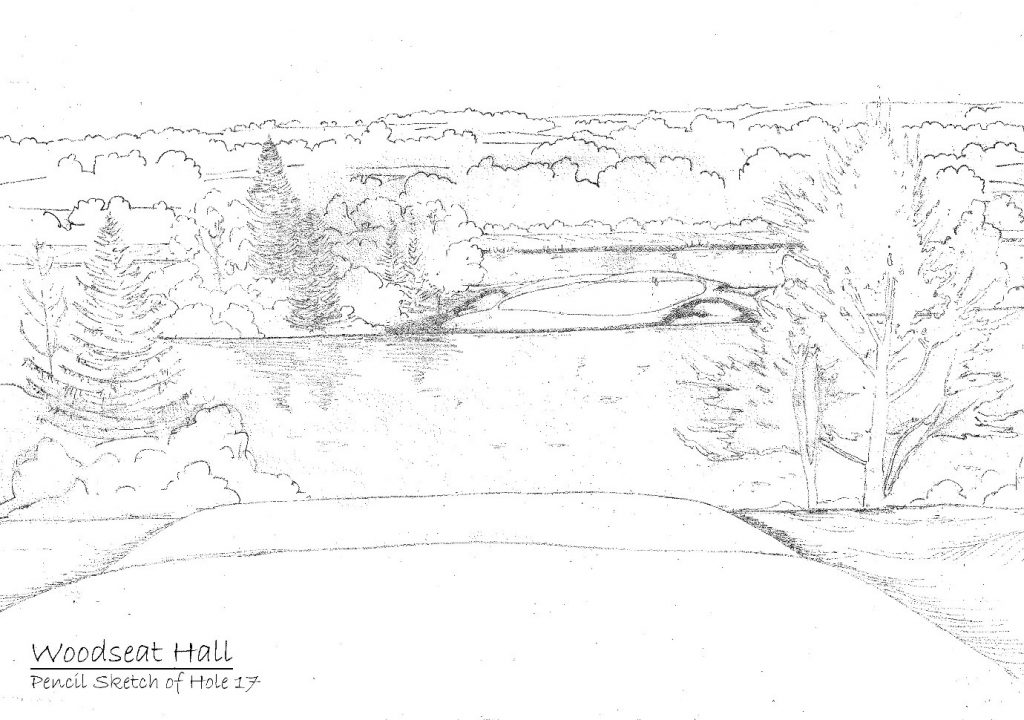 Above: An early sketch, which helped us get the concept approved.

I asked to visit the island. With the golf project being top-secret, I adopted the identity of an ecologist doing a tree inventory, just in case our boatman, Mick, asked as to why he was ferrying me over. Half way across the lake, the boat engine cut out and we started to drift away from the island on the breeze. We had an oar for such an emergency, but Mick, who is a big, strong unit, wasn’t going to let a puny little engine get the better of him. For minute after minute he thrashed away at the pull cord, boat rocking and sweat flying off his ham pink brow. This was furious, 2-stroke CPR and Mick was going to resuscitate it, or die trying. Finally, almost miraculously, it spluttered back into life. Mick sat back down, his long exhalations misting the cool, winter air and wordlessly steered us back on course. The oar remained stowed.

The island itself was physically unremarkable, but there was an undeniable aura about it. Its time in the sun was coming. I ‘surveyed’ the trees for 10-15 minutes and we got back on the boat. Mick got it started immediately, much to our relief. We motored slowly around the island for me to take photographs and then set off for the mainland. Half way back, the engine cut out… 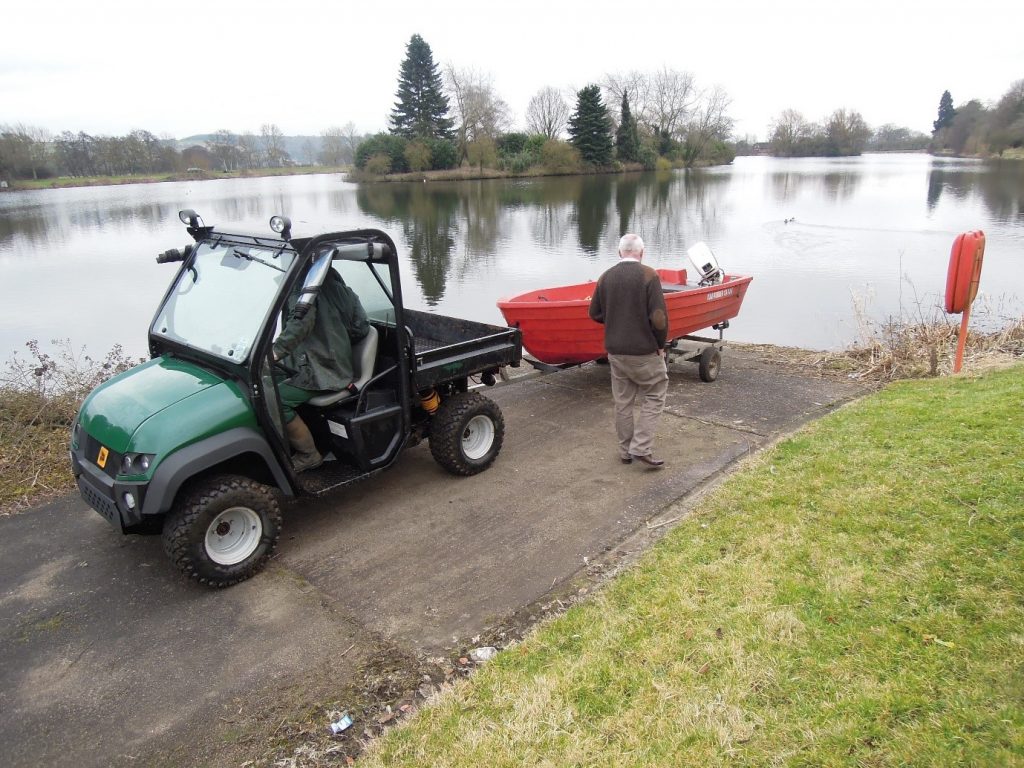 Above: February 25 2013: Mick backs the boat into the water before our memorable first visit to the island. Steve Dewhirst (in on the secret) looks on. 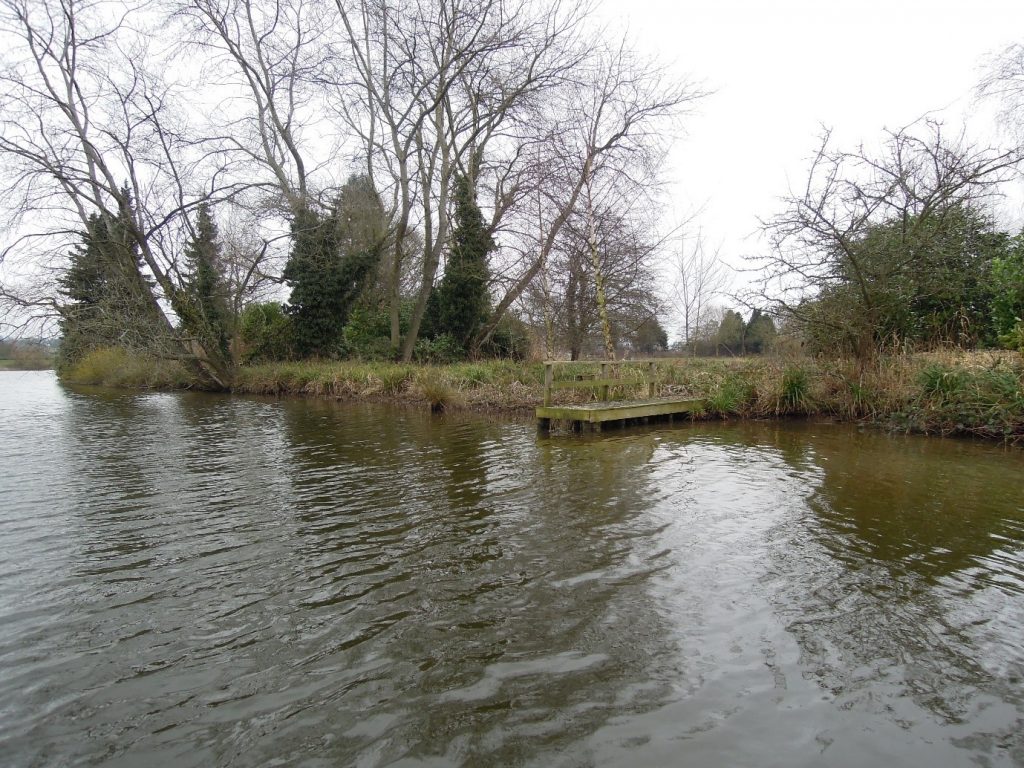 Above: February 25 2013: Approaching the landing stage, beside the sprawling Goat Willow tree that grew exactly where the green would later be built. 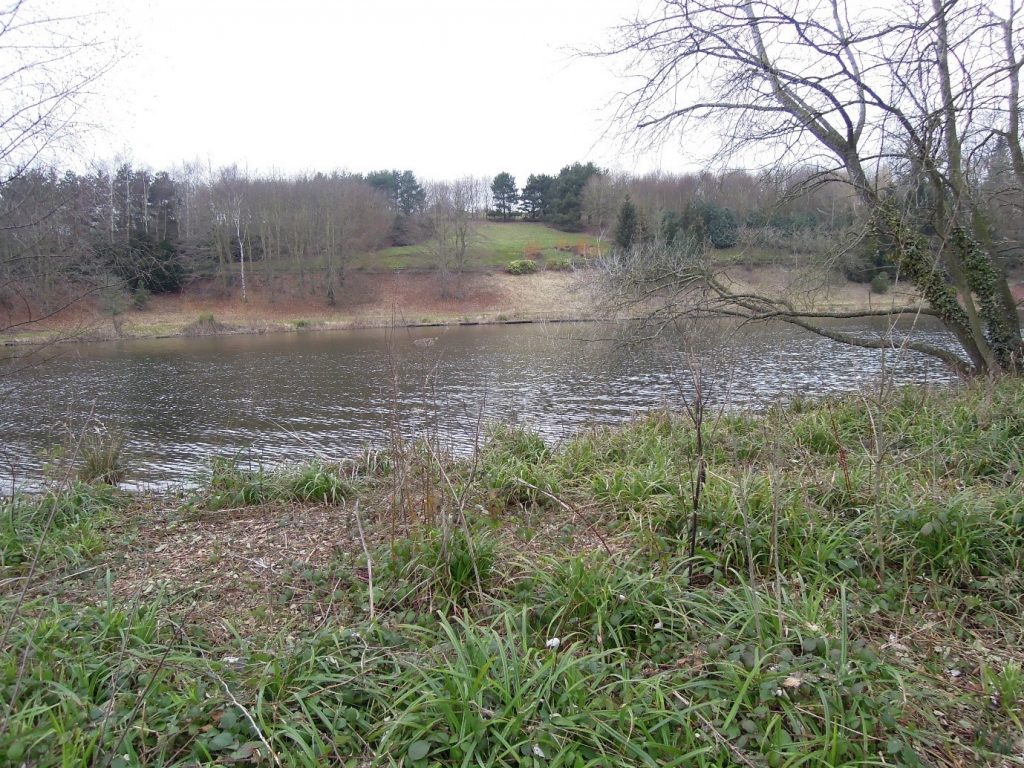 Above: February 25 2013: Looking back from the island towards the gap in the trees where I first stood and where the tees would be built. I still have no idea why this gap in the woods existed, but if it hadn’t…

With the island hole cemented into the routing, we had the opportunity to improve other aspects of the back nine, most noticeably the addition of the 18th tee to the south end of the island. Golfers would have to play off the island, as well as onto it. This idea transformed the closing hole into a 462-yard, uphill, monster par 4. With two holes now located where previously there was just one, we therefore needed one less hole elsewhere. This directly created the space for the colossal, 627-yard, 13th hole. The positive domino effect of the 17th brought the back nine to life and gave us a layout with character and stature.

We had to consider how to get to the island. My preference was for a ferry, like the one that drifts serenely across the river on the 18th at Brocket Hall, or takes golfers out to the floating green at Coeur d’Alene. I wanted to retain the island’s purity and physical detachment. Conceptual designs were commissioned, which would have involved two boats going back and forth in unison on a looped chain. The concept was defeated by a combination of costs and logistics, but not before I had designed Hole 17b, as a backup for when the ferry was out of action. This alternative par 3 played down the first part of the originally designed 18th hole, from a tee at the very top of the hill, which also, intentionally, lined up with the island green. When the ferry scheme was abandoned, we had no need for the alternative green, but we still built the tees, which is why the 17th measures 255-yards from the tips. 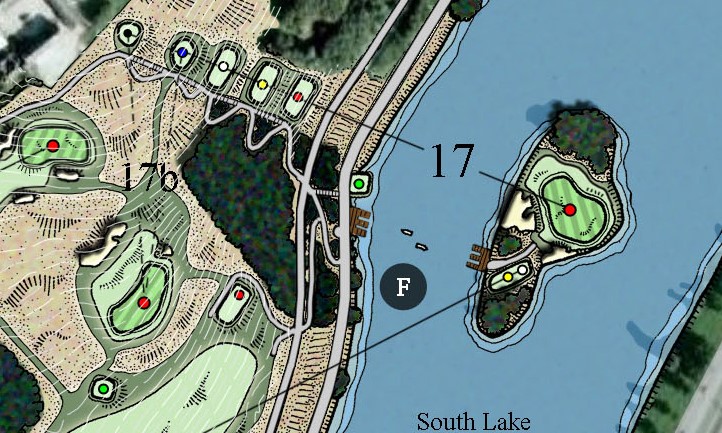 Above: This extract from the original hand-drawn Masterplan shows the ferry concept, Hole 17b and the 18th tee on the island. Note how the top two tees on 17 could be played to either hole.

17 is not an island green, it’s a green on an island. The former suggests something created artificially and specifically, whereas this is a found hole, exploiting an existing landscape feature. Many island green par 3’s are played from close to the same level between tee and green, but this hole descends 50-90 feet to the green, depending on which tee you play from and from a distance between 183-255 yards. Only the drop zone tee is at water level. Such a large difference in elevation offered the potential for an exceptional view, provided the contouring of the tees was correct. Often you get a great view from the front of a drop shot tee, but take a few steps backwards and all you can see is the sky. I set a minimum requirement of being able to see at least half the width of lake in front of the island and at least some of the water behind the green from any point on every tee. It was crucial to the aesthetic and the design psychology that the island looked like an island. We achieved our aim through the trial and error of many sketch plans and cross sections. These generated a well-conceived shaping and elevation plan for the tees and enlargement of the island, which would be lengthened from 22 to 60 metres deep. This was allocated entirely to the rear of the island, so retaining the full width of the lake and an undisturbed shoreline facing the tees. This ensured the maximum amount of water could be seen.

The island design features three bunkers, each of which emerge directly from the lake. I wanted the bunkers to imitate natural sandy shorelines, without the formality and artificiality of a narrow grassy strip or wall defining the water line.

The green design originally had a ‘velodrome’ style backstop to contain an overhit shot, but this blotted out a view of the lake behind from the lower tees. Instead, the green cambers markedly from back to front and is split into two halves by a spine ridge. An unnerving infinity line demarks the back of the green, with the beach bunker lying hidden beyond.

JCB commissioned model maker, Jeff Shuttleworth, to create an accurate scale model of the course, based on EGD’s detailed plans. It was made in time for a public exhibition, at which the project would be announced to the locals. It is an extraordinary piece of work, which served to show the public the concept scheme in a three-dimensional, tactile way. The main talking point was the island hole. Nobody could quite believe a hole like this was being built in rural Staffordshire. There was amazement at the ambition of the scheme and excitement it was happening in the neighbourhood. The model now takes pride of place in the clubhouse. 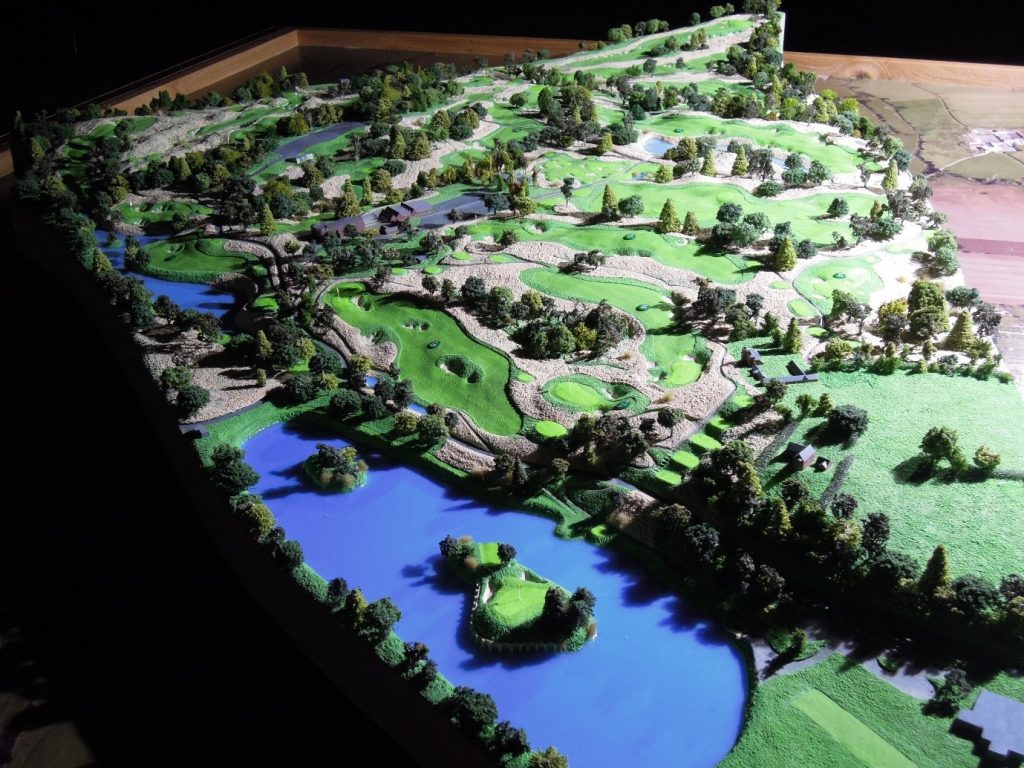 With the scheme announced and planning permission achieved, we were ready to turn this exciting idea into reality.

Rehearsing for my PowerPoint presentation with Euan Grant at BTME 2020 in Harrogate next week. We’re telling the story of the @JCBGolfCC construction project at 13:35 on Wednesday in the main convention hall. 73 lovely looking slides like this one! RH pic.twitter.com/6Khg5ZnmMk

2020 will be another exciting year of tournament golf played on courses we are involved with. Find out more on our news post - European Golf Design on Tour in 2020 egd.com/?p=2779

....and it’s not even the most photographed Par 3 at JCB! #JCBGolf twitter.com/JCBGolfCC/stat…

The 2010’s have brought many things - starting with recession and ending in Brexit. In between, extraordinary projects with amazing clients and colleagues. To all of you, a peaceful and healthy year (and decade) to come. And a taste of just something to ahead in 2020.. pic.twitter.com/7BO9CiVY6y