European Golf Design are pleased to announce the official opening of a new inner-city golf course in Glasgow designed by the company in partnership with Colin Montgomerie. Ruchill Community Golf Course has been developed on the site of the original Ruchill Golf Course which was closed by Glasgow City Council because of vandalism in the 1997. The completely new course has been built to provide accessible golf for the local community and in particular to offer golf tuition to juniors. In addition the course will act as a training centre for greenkeepers and club managers. The scheme has been aided by contributions from, amongst others, Sportscotland and The R and A and has the backing of the Scottish Golf Union.

The project received the enthusiastic support of Colin Montgomerie who officially opened the golf course this week.

Ross McMurray, one of the lead architects on the project for EGD said, “We were delighted to be able to assist Colin in the design of the golf course at Ruchill. This was an ambitious project which has taken a number of years to reach fruition, requiring the involvement of a wide range of different organisations working together in partnership. We are sure that this revitalised green space adjacent to the Forth and Clyde Canal will provide a focus for sport and education for the local community as well as a broader opportunity for social integration. There are few, if any, inner city golf projects of this kind in the UK but hopefully it will provide youngsters with a unique chance to develop an interest in golf which will last a life time.”

The Seniors Tour travel to Casa Serena in the Czech Republic for the Casa Serena Seniors Open, the second year the tournament has been held. Won in 2008 by Bernhard Langer, his maiden Senior Tour win, Langer’s title defence could face a stern test from two fellow former Ryder Cup Captains in Sam Torrance and Woosnam, who are locked in a battle at the top of the Order of Merit.

Casa Serena Golf Course is the vision of Terry Gou, the chairman of Foxconn, the largest contract manufacturer of electronics worldwide. The course resides deep in the rural Czech countryside, alongside the castle of the same name that Terry Gou bought and refurbished to be his personal European residence. The course is for the use of the executives and guests of Foxconn and opened for play in 2007.

European Golf Design designed two courses at Ribagolfe, located near Santo Estevao, 30 minutes drive east of the city centre. Ribagolfe 1 with Ex Walker and Ryder Cup golfer Peter Townsend and Ribagolfe II with Ex Walker and Ryder Cup golfer Michael King. Set within a forest of cork oak trees and the design makes full use of the sweeping undulations of the site, providing many spectacular golf holes across valleys and lakes.

If you’ve read Alex’s blog from Monday, you’ll know he was up in North Berwick over the weekend. I’ve just returned from a trip there myself and, while my news is not nearly as exciting as Alex’s, it does represent an engagement of sorts – we’ve some pretty exciting things to share with you over coming in the next week or two relating to a strengthening of our relationship with the leading authority on golf and sustainability – The Golf Environment Organisation.

In the meantime, it was a beautiful morning in North Berwick this morning and, with a slightly fuzzy head caused by one dram too many last night, I took a quick walk onto the links. These were taken at about 7am…

I have just arrived back in the office from a long weekend in Scotland. I visited Gullane in East Lothian for a couple of rounds with some of my family, the weather prohibited any more than that, I have never seen so much rain in September, and when it wasn’t raining, I think the term ‘blowing a hoolie’ sums it up. It was our first long drive with the new dog, who behaved much better than Alaina in the car, sleeping most the time.

Alaina and I lost narrowly to my Dad and Brother on the first day on Gullane number 3. A short but not easy course, the pictures not really doing the wind justice. We then got another game in on Gullane number 2, another nice links course with some great views over the Firth of Forth and into Fife. Luckily, I did not lose the second game, My Brothers and Dads nerves getting the better of them.

There is some other news from the weekend, Alaina and I are getting Married. Against the odds she said yes to my question on Friday night. The Picture of her and Mac(the dog) was a few minutes before I asked her……..

The Sun is Shining at Rowallan Castle

Just back from Rowallan Castle in Scotland where we are putting the finishing touches to a Colin Montgomerie golf course. The weather was glorious and when the sun is shining there will be no better place for a round of golf. The setting is wonderful – the course plays around two of the finest castles in Scotland (the ‘old’ castle built in the 13th century and the ‘new’ in the 19th). There are streams and stone bridges and superb views to the Firth of Clyde and Arran.

Every hole has its own distinct character but I think, as a group, the par 3’s particularly stand out. Having said that my personal favorites are probably the two short par 4’s, the 7th and the 12th. Both are between 280m and 320m but getting a birdie on either will be a real achievement and pars will probably be few and far between!

The course will be open for limited play later this month.

It was great to see all my golfing heroes up at Sunningdale last week for the Seniors British Open. They were all there, Faldo, Norman, Torrance, Langer and Tom Watson. Surrounded by trees Sunningdale is a heathland course west of London and just a few miles away from Wentworth, it has 2 courses the Old and the New. The Old Course was designed by Willie Park Jr in 1901 and the New by Harry Colt in 1923. Recently both courses have undergone renovation work mainly to the bunkers by Artchitect Martin Hawtree. The club emblem is an oak tree after the huge oak tree standing majestically beside the 18th green. Recently the course has hosted the Seve Trophy, Open qualifying and British Ladies Open in 2008 won by 21-year-old Ji-Yai Shin. The Old course is rated by many as one of the best courses in the world.

The Seniors Open had added interest for me, working with the staging team at the European Tour I produced the course graphics for the event. Planning for such an event is huge and began over 12 months ago. Work on site began over a month ago to erect the stands, tented village structures and putting in place the thousands of metres of cables for TV and communications.

The event also brings an added boost to the local shops with a noticable amount of extra business being done by the small shops, pubs and cafes. From our 1st floor office we have the perfect spot for people watching which can be great fun in a town like Sunningdale.

Watching the players of yesterday brings back many great memories, but don’t be fooled these guys can still hit the ball and the hunger can still be seen. After 4 fascinating rounds Loren Roberts eventually won in a play-off. Many big names were narrowly beaten as the final leader board shows.

Looking back it really was a great event, from the relaxed atmosphere to the exciting golf. It was so nice to see the crowds of young fans queueing up for autographs and the friendly banter between the players.

A last mention for our Director Michael King who along with being a member at Sunningdale is an ex-player and without injury would have been in there at the end as his great friend Sam Torrance was.

Wednesday evening in Madrid. What to do? The first rule of traveling is never to eat in the hotel – if you eat there, all you ever see is airport, golf course and hotel. So, taxi to Plaza Mayor. Stroll around for several hours. Stop in several bars. The great thing about Spain is that if you order a beer, you get a small plate of olives, or salad, or vegetables, meat or fish. In Italy it would be called Antipasti. In Spain, it’s tapas or, for the really hungry, ‘raciones’. So, you can wander, stop at a bar, have a drink and something to nibble on; then wander off again, only to repeat the process when you find another bar that looks interesting. Hours later, it’s time to go back to the hotel, not having sat down to a meal, but having eaten more than enough. And having seen a lot of a beautiful city. Perfect.

Italy’s Diana Luna hit 18 greens en route to a stunning final round of 68 and claimed her first tour win in five years at the AIB Ladies Irish Open supported by Failte Ireland. She said she enjoys Ireland. “The people and the atmosphere are so great. We always play great courses; links is my favourite,” she said.

“It is a very rare occurrence”, according to Yvonne Cassidy, Tournament Director of the AIB Ladies Irish Open for the Ladies European Tour, for every one of Europe’s top 40 ranked professionals to enter for a tournament. This demonstrates the success of the event in 2008 on the Portmarnock Links club and clearly establishing it is as one of the premier events on the Ladies European Tour.

During the event Laura Davies was made an Honorary Member of The Links Golf Society at the AIB Ladies Irish Open supported by Fáilte Ireland. The English star was awarded the first female honorary membership, in recognition of a lifetime of achievement in women’s golf.

From this weeks Spike Bar – by John Hopkins, Internet Sports Writer of the Year
Portmarnock Links is a course of two halves. You make your score on the outward nine holes, which are flat and quite open, and then hope to hang on to it on the inward nine holes which wend their way through sand dunes – a lengthy tongue of shallow dune land as the late, great Pat Ward-Thomas described it – by the side of the Irish Sea a few miles north of Dublin. Bernhard Langer is credited with the design of the course but Stan Eby from European Golf Design did all the work and deserves more credit. 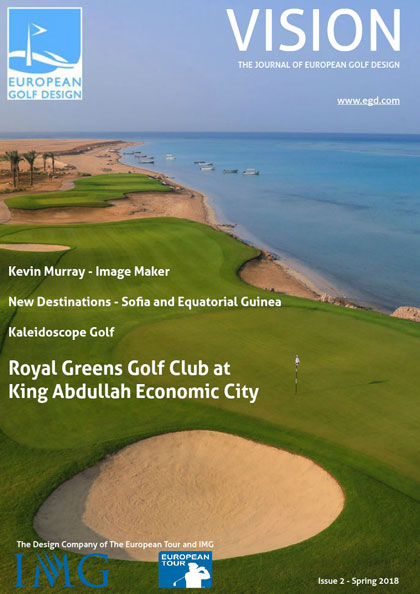 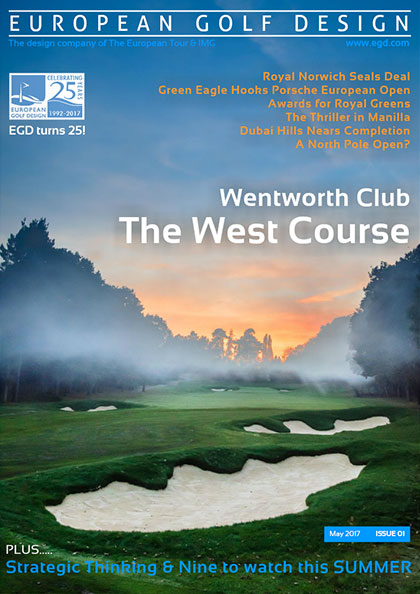 Sand added to bunkers on Holes 2 & 1 - starting to